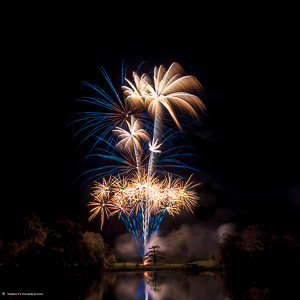 FIREWORKS BY THE LAKE
Previous
Next

It's firework season...
04/11/2012
It's firework season, I visited Sherborne Castle for the annual display. A chilly evening, but a spectacular display. I arrived early with my youngest daughter and we scoped out the area. i was primarily looking for somewhere different to shoot from. I had a position in mind, but I ended up deciding it wouldn't work out.

So after a bite to eat, we set up, manually focusing on the trees on the other side of the lake, and fired off a high ISO (1600) test shot of just over a minute to check for composition. 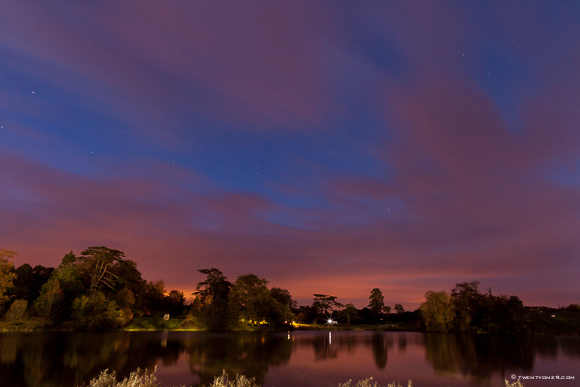 The bright light on the other side of the lake was where the pyrotechnic crew were finishing off the prep.

Over the last couple of years I've refined the settings I've been using. One of the most important factors is the tripod and shutter release cable, ensuring that the camera remains stable and untouched. I strap glowsticks to the tripod legs to ensure they are visible and aren't a trip hazard.
An ISO setting of 100 and an f-stop of between 11 and 16, ensuring any in camera noise reduction is turned off.
I've found that f/16 will make certain colours 'pop' with the exception of dimmer ones such as gold.
With Bulb setting on my Canon I could control exactly how long I wanted the shutter open for, with the dimmer fireworks I was leaving the shutter open much longer to capture a fuller frame of explosive colour, without losing the highlights.
On this occasion my shots were taken with a Canon 24mm f/1.4 II L lens and ranged between 12 and 17 seconds.
After a wonderful 25 minute display it was time to go get warmed up!

In post production of my images I set the correct lens profile, and the camera profile, in this case 'standard'.
From here I will adjust the contrast and black levels to -25, this helps to reduce the smoke produced by the fireworks and brings out the colours. Also, I will adjust the highlight and shadow levels, finishing off with a little bit of vibrance and clarity.
Further firework images can be found in the galleries in my portfoilo. 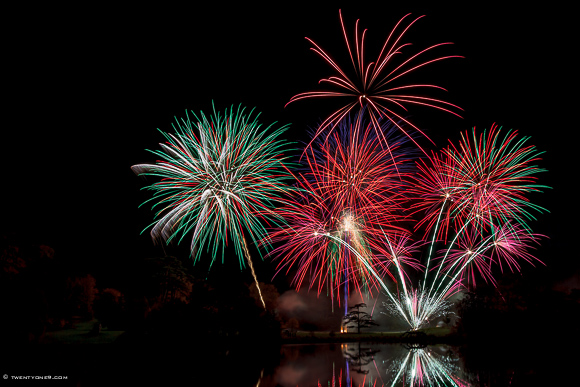